How Does Laser Ablation Treatment Work? 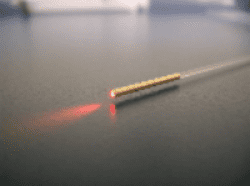 The treatment involves passing a fine tube (catheter) by making a small incision in the skin near the knee. The tube passes through the incision and then goes till the affected saphenous vein. The catheter is then attached to a laser, which sends heat impulse into the affected vein. The heat seals off the walls of the vein so that there cannot be any blood flow. The whole treatment is done under local or general anesthesia. In order to allow the patient a more rapid recovery, in the majority of the cases, local anesthesia is done.

How is Laser Ablation Different to Standard Surgery? Which One is Better?

In standard surgery, a cut in the groin is made to tie off the vein, after which it is manually removed by a stripping device. This procedure causes excruciating burning pain after the treatment. In laser ablation, there is no need for any cut in the groin, and the procedure involves minimal bruising. So, in the latter case, people can return to their normal activities sooner than those opting for the standard surgery.

Another advantage of laser ablation over standard surgery is, in the former case, there is very little discomfort and bruising compared to the conventional treatment. However, in the long run, excellent cosmetic results are expected from both the techniques.

Can all individuals with varicosities go for laser ablation?

What are the Post-operative Side Effects?

The patients are able to walk normally immediately after the laser ablation treatment. However, they are advised to refrain from vigorous exercise, swimming, and other such things for the first week. The leg may ache initially and there could be minimal bleeding, but these are not troublesome. The patients are advised to wear compression stockings for one or two weeks. The patients need to come for a follow-up after one or two weeks following the treatment. 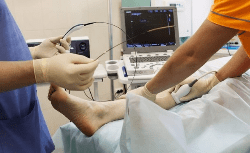 The minimally invasive treatment of varicose veins is radio frequency ablation therapy. The doctor surgically removes the damaged tissue by the application of heat. The heat scars the tissue, which eventually closes the affected vein. Instead of laser ray, radiofrequency waves are used to heat up and damage the inner wall of the affected vein.

In order to do radio frequency ablation therapy, the doctor inserts a thin tube (catheter) through a tiny incision in the vein. The procedure is so simple that it can be done using a mild sedative or local anesthesia. The therapy can be done to treat larger veins on the legs as well. The recovery time is also quite short and the patient would be able to walk following the treatment. Patients are advised to wear compression stockings for one week or more, as per individual condition. During the follow-up, the doctor uses a duplex ultrasound in order to ensure that the affected vein is completely closed.

At the time of the procedure, the patient is asked to sign consent forms, the list of medications presently taken, and mention of any current allergy to a specific medication. The whole treatment procedure lasts for fifteen to forty-five minutes (depending on the number of affected veins), followed by a recovery period.

Step 1: The patient lies on the x-ray table and local anesthesia (or mild sedative for relaxation) is given to make the treatment area numb.

Step 2: The skin over the affected area is well cleaned. During the whole procedure, the patient remains awake and aware and can provide feedback to the physician.

Step 3: With the guidance of x-ray (fluoroscopy), a special radiofrequency needle is directed alongside the lateral or medial branch nerves. The fluoroscope allows the doctor to watch the needle on the real-time fluoroscope monitor, to ensure that the needle goes into the desired location.

Step 4: A tiny amount of electrical current is passed through the need to the target nerve, keeping a safe distance from other nerves, through the administration of radiofrequency waves, creating a small burn known as lesion. The current creates a pressure and the patient might feel a muscle twitch. This electric current disrupts the pain-producing signal. On each site, the burn takes approximately 90 seconds.

Step 5: The targeted nerves are then numbed to minimize the pain, when these single or multiple (if required) lesions are created.

The Side Effects of Radio Frequency Ablation Treatment

However, these side effects are less likely to take place if the radio frequency is done by an experienced doctor.

- Telemetry Rhythm Monitoring (up to 30 days)